Snapchat is launching a new supervision tool on Tuesday as part of its child safety efforts. According to the firm, the tool simulates how parents and teenagers engage in real life.

Snapchat’s new “Family Center” site lets parents and guardians monitor who their teens communicate with on the platform without knowing what they’re saying. Before the oversight tools may be used, both the guardian and the child must accept the Family Center invitation. Once the invites are accepted, a guardian can view their child’s whole buddy list and a list of accounts they’ve engaged with in the last seven days and flag suspicious accounts to Snap’s Trust and Safety Team.

Snap stated in a blog post on Tuesday, “Our goal was to construct a collection of tools meant to replicate the complexities of real-world interactions and foster collaboration and trust between parents and kids.” The function is intended to mimic real-life relationships, such as when a parent allows a child’s friends to visit but does not supervise everything they say.

Snap intends to release more Family Center features in the coming weeks, including tools that allow parents to view the new friends their children have added, as well as enhanced content controls.

Snap’s new parental restrictions come as politicians try to improve children’s online safety. Following the revelation of internal documents by Facebook whistleblower Frances Haugen revealing how Meta’s platforms might affect underage users, some of the top tech platforms were invited to testify before Congress. A Snap official testified before a Senate committee last October, alongside representatives from YouTube and TikTok.

Jennifer Stout, Snap’s vice president of global public policy, stated at last year’s hearing, “Snapchat was developed as an antidote to social media,” indicating how Snap is distinguishing itself from Facebook and other social media platforms.

Following Haugen’s disclosures and subsequent hearings, a number of proposals addressing children’s online safety were introduced. According to The Washington Post, a Senate panel adopted two legislation late last month that would limit how tech platforms acquire and utilize data from teenage users.

The Children and Teens’ Online Privacy Protection Act, for example, would prohibit tech companies from collecting data from users aged 13 to 16 without parental agreement. The Kids Online Safety Act, a second bill, would create an “eraser” button that would allow young users to instantly wipe their data from platforms. The measures were approved amid a growing movement of activists calling on politicians to expand the age limits under federal legislation to include the privacy of children aged 13 to 18, rather than just those under 13.

Following Snap’s congressional appearance in October, the firm revealed that it was working on the Family Center product that was unveiled on Tuesday. “Our ultimate objective is to assist educate and empower young people to make the correct choices to increase their online safety and to help parents be partners with their kids in navigating the digital world,” a Snap representative said last year in a statement to The Verge.

Through its Quick Add menu, Snap introduced a feature in January that limits the number of buddy suggestions teenagers see on its app. According to the firm, children aged 13 to 17 are only recommended for accounts that “have a certain number of friends with that person.” 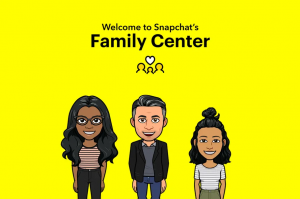